skip to main | skip to sidebar

New wheelchir. I think he likes it.

Why homes are needed

This is home for 10 people.

^ Click on the arrow above to see video.
Posted by Dick at 5:14 AM No comments:

What they need is some one who cares.

Fidel mops the halls with his power wheelchiar.

Byron and Moises in the Park.

Christopher in his power wheelchiar

I Want To Be A Godly Man

Go ye into all the world

This was the first time that 10 year old Maria Veronica was ever able to move around on her own.
Posted by Dick at 7:18 AM No comments: 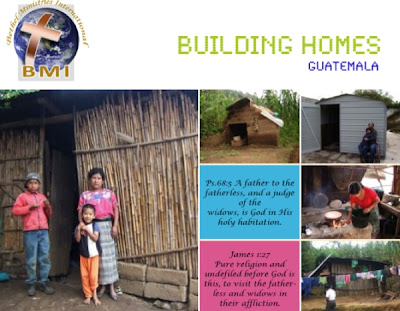 The heart of God is to care for those that are unable to provide or care for themselves. It is this that we have sought to do; taking care of orphans and people that are physically less able to provide for themselves. At this time God has opened a door to help especially widows with new homes. This is an exciting opportunity. Christian men in Florida are providing the basic houses we need, and we plan to put in the simple cement slabs upon which the houses will be assembled. To people in more affluent areas, these are very small houses, but to a widow who is living in a cornstalk home, or to one whose cooking lean-to was smashed by a landslide two years ago, this provision is indeed a God-send. These homes are durable and will keep families warm and cozy even during the rainy season. We need to buy the materials and engage some local workers to put down the cement slabs. The cost is not great, and with your help and prayers it can be done. See below for the first seven families that have need.

Present homes in process:
Young Widow Maria, with 4 children. State of the project: Sponsorship received. The cement floor/foundation is being poured this week. Local people are helping us to raise up this home. We like to involve them, especially if God has given them the heart to help others. Many hands make light work.

Sponsors still needed for cost of slabs:
Ijinia lost her husband who died of liver failure from alcoholism. She and her children are sleeping in a little house with eight others. This woman is a faithful believer that has attended the local church in San Jacinto for years. In her lifetime she has seen the tragic '76 earthquake, the long war years that were especially fierce in her area, and many other hard situations.

Paula Paulich needs a home. Her husband is ill and not able to support the family.

Woman who calls “home” a 6 by 8 cornstalk cage.
Antonieta is a younger woman who has no visible means of improving her life. We could not believe the home she lives in. As I visited her and saw the sides of her cornstalk home; I could see that dogs, rats, chickens, or even pigs could just wander into her house day or night. She and her two boys need a fresh start in life.

Ines lost her cook house in a mudslide. This woman has been cooking for two years on a little campfire in front of her house. She has a tiny roof overhead but when it rains hard, her fire and food get saturated with water. Her husband was harassed so much by guerillas during the war here that his mind snapped.
State of the job: The land has been leveled and we are waiting for funds to put in the needed foundation floor for the emergency home.

Gladys Argueta, a widow with her 2 children. 6 years ago her husband became ill with cancer, and after suffering the long illness, died. Since that time, Gladys has been working in the fields to provide for her children. Now she is also working in ministry, along side the pastor’s family, and has dedicated her life to evangelizing. She has become the right-hand of the pastor’s wife, and leader of the women’s group of her church. Her son participates in the worship team.

Elsa Corona with her children, Daisy, Londy, and Greivi, also need a home. Elsa grew up on a coffee plantation. All her childhood she spent weeding and harvesting coffee with her parents. She only studied for one year; she can barely read, and can not write. She is a very hard worker. After she married and had 5 children, her husband abandoned them. In her anguish, she sought God and is now serving the Lord with all her heart. Now however, they live in one room; they suffer much.

Macaria is the woman who inspired the opening of the Bethel Ministries wheelchair shop years ago. She was seen crossing the highway one night, dragging herself across. She received a wheelchair from the first busload that came down from the States. Presently Macaria lives only with her two children in a leaky structure. We would love to bless her once again.
Posted by Dick at 9:11 PM No comments: